* If you click a link on this page and make a purchase, we may receive a small commission at no extra cost to you. Learn more.
Tool Dizer › Saws › Dewalt DWS779 vs. DWS780: Which is Better? 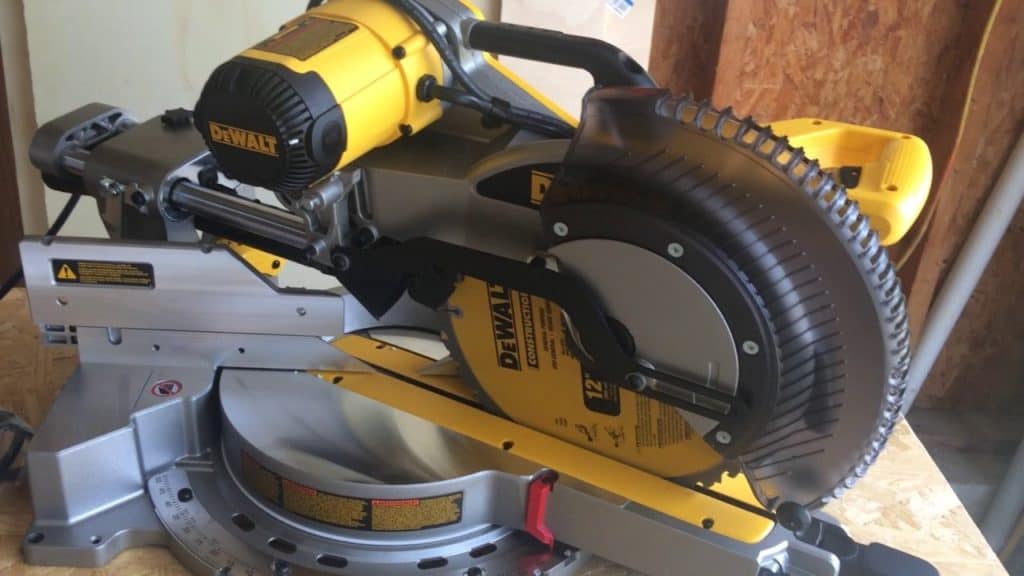 If you have been searching for a miter saw, it’s highly likely that you have come across Dewalt’s broad collection, particularly its top two best sellers, the DWS779 and the DWS780.

Narrowing down your choices to these two implies that you’ve already come a long way. The toughest and final part is deciding between two seemingly equally good options.

For that particular reason, we’ll examine the similarities and differences between both miter saws and give you our reviews and recommendations to ideally make your decision easier.

The DWS780 takes the lead, principally due to its XPS system, which radiates a bright LED light along the length of the blade, accordingly casting a shadow in line with the blade itself, leading to much higher precision. The DWS779 adapts a more traditional laser guide system, that is inclined to go out of alignment after a while.

The key element in any miter saw is its power because it’s directly proportionate to the overall performance of the saw.

On that note, the two miter saws are precisely the same. Both the DWS779 and the DWS780 are fueled by 15 amp motors and have a no-load speed of 3800 revolutions per minute (RPM), enabling them to cut through almost all types of wood.

The 3800 RPM speed helps to make cuts rapidly and neatly, which is the differentiating point between lower quality miter saws and higher quality ones.

The standard for miter saws is that they can handle lumber wood up to 12 inches wide and 6.75 inches thick. The DWS779 and the DWS780 are both unique in that they can additionally handle workpieces that measure up to 2*16 inches for dimensional 90-degree crosscuts and up to 2*12 inches for 45-degree bevel cuts.

Moreover, their bevel capacities range between zero to 49 degrees, with positive in both directions, allowing you to stop wherever you need to stop.

When it comes to blades, the two miter saws are again indistinguishable. Both have 12-inch blades and weigh around 60 lbs.

However, while the DWS779 only comes with the steel blade, the DWS780 also includes a carbide blade, a material known for its versatility and durability. In such a manner, the DWS780 blade will be more repellant of erosion and will withstand higher temperatures than other blades.

What’s more, carbide blades require minimal maintenance as they are fit for remaining sharp over time and are extremely difficult to bend. Accordingly, the highest of speeds and the most elevated temperatures won’t affect its toughness or structure, giving the saw a much longer lifetime.

The guiding system is the distinguishing factor between the DWS799 and the DWS780.

The DWS799 utilizes an increasingly traditional and conventional laser guide system, which is reliable, but the DWS780 incorporates the X-ray photoelectron spectroscopy (XPS) system, an advanced surface-sensitive quantitative spectroscopic technique.

In miter saw terms, the XPS system includes a bright LED light that shines along the length of the blade, empowering the saw to cast a shadow that follows the movement of the blade, an evident shadow.

Not only that, but the XPS system also mingles with the positioning and alignment system, providing line traces that are adequate to follow without any further adjustments. This keeps the alignment very precise.

On the other hand, the DWS799 traditional laser guide is bound to go out of line and move askew over time or with each use. Therefore, its precision is not 100% ensured.

Miters will, in general, produce countless residues after usage such as wood dust and the like, which can be significantly damaging to the skin, eyes, mouth, nose, and overall health.

Accounting for this, the dust collection system is a bonus feature that is present in both the DWS779 and the DWS780.

Integrated into the miter saws, the dust collection systems can collect over 75% of the dust created in a regular session of cutting. This is an efficient and practical advantage that not only preserves your health but also keeps your work zone clean.

What Is In The Box?

The DWS780 was launched and marketed as a replacement for the DWS779. In other words, it’s an advanced version of the DWS799.

All factors considered, the difference between these two miter saws is negligible, mainly being the inclusion of the XPS system in the DWS780 and the extra addition of the carbide blade. Other than that, they are a duplicate of one another.

The XPS system, however, is not a cheap advantage. Understandably, this causes a price gap between the two saws, with the DWS780 being notably more expensive.

Therefore, the call is yours to make. If you feel that the XPS system does not merit the noteworthy increment in price, then the correct choice for you would be the DWS779 since it indistinguishable features and capabilities from the DWS780, with the exclusion of the XPS system.

The DWS779 is likely to be purchased by amateurs since the work at this point is still of lightweight, adding to the fact that it comes at an appealing price point with high qualities.

As for the professionals, the DWS780 is a no-brainer, as it guarantees precision and versatility for heavy-duty, substantial jobs.

Our verdict, though, is to go for the DWS780, since it can be ideal for both amateurs and masters alike. The alignment part of the cutting process is typically the toughest one, so the XPS guiding system comes in handy in making the job easier. It’s an investment worth making!