* If you click a link on this page and make a purchase, we may receive a small commission at no extra cost to you. Learn more.
Tool Dizer › Saws › Dewalt DWS780 vs. DWS782: Which is Better? 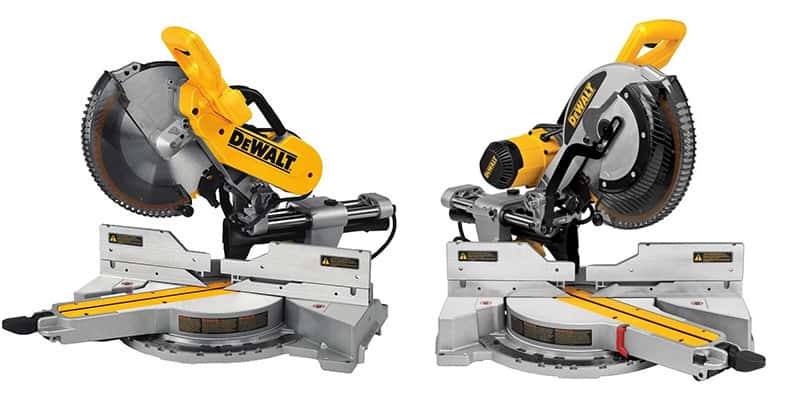 So, you’re shopping for a new miter saw, and you’ve come across two Delwat miter saws: DWS780 and DWS782. From a distance, they seem to be identical; however, that is not completely true. They do have a lot of similarities, but they shouldn’t be described as ‘identical.’

Without further ado, here’s everything you need to know about both miter saws: their similarities and their differences.

The DWS780 is lighter in weight and has an XPS system that comes with ultra-bright LEDs for increased precision. On the other hand, the DWS782 has a better blade that gives a smoother finish and a much better dust control system than that of the DWS780.

The DWS780 and the DWS782 are almost identical except for some key differences.

Both saws come with a 15-Amperes motor with 3,800 rounds per minute (RPM). That motor power is considered high-end that will provide you with sufficient power for most tasks. While you can find saws with RPM of 5,000 or even 6,000, the 3,800 RPM is still considered good.

The reason why RPM matter is that it describes how many turns your blade makes in one minute. Meaning, the higher that number is, the faster the blade spins, which leads to easier cutting through your material.

Again, both models are identical when it comes to capacity. They both have a vertical capacity of 6-¾ inches and a horizontal capacity of 13-⅞ inches.

Both The DWS780 and the DWS782 can miter up to 60 degrees to the right and 50 degrees to the left and an adjustable plate with ten positive stops and a cam lock button that does exactly what you’re thinking. It locks the angles between detents.

Furthermore, they both provide 12-inches double bevel ranging from 0 to 49 degrees with positive stops at 0 degrees, 22.5 degrees, 33.9 degrees, 45 degrees, and 49 degrees. Having double bevel means that you can tilt your saw to both directions (left and right), not just the left side like some saws are, so you wouldn’t have to flip your saw.

Having double bevel with preset cutting angles is a very convenient feature that both models have. They can save you the time and effort that you’d spend flipping or adjusting your saw.

What’s in The Box

Both boxes come with the 12” double bevel miter saws, one blade, one wrench, one dust bag, and one vertical material clamp.

While both models claim to have 75% dust absorption, one of them lives up to the claim and the other…well, not so much.

The dust control in the DWS780 is flatly inefficient. The dust tends to get everywhere and clogs inside the tube quickly. That issue is easy to get over if you have a dust vacuum of your own or you’re willing to purchase one.

On the other hand, the DWS782 isn’t perfect when it comes to dust collection, either. However, it is much better than the DWS780 and easily gets the job done. Nonetheless, it can also get clogged, just not as often or as quickly.

When it comes to precision, the DWS780 has raised the bar too high with its XPS cross-cut positioning system and ultra-bright LEDs. Unlike a usual laser pointer that shows just a line right next to the blade (accurate but not perfect), the DWS780 works with shadows. The LEDs cast a shadow exactly where the blade will land for maximum precision.

However, that feature is not perfect. It can be useless when you’re working outside in the sunlight or in bright areas where you will not be able to see the shadow.

On the other hand, the DWS782 is known for its excellent precision even though it doesn’t have the XPS feature or even a laser. That is not necessarily a bad thing; it just depends on what you’re used to working with; however, the LEDs are still a nice feature that can speed up your work significantly.

While both the DWS780 and the DWS782 come with one carbide blade, one of them takes the cake.

While the 32T blade is not necessarily bad, it’s not the best if you’re looking for a smooth finish. The DWS782’s blade has almost twice the number of teeth of the DWS780. We’ll let you do the math of that one.

However, if you’re looking for a perfect finish, neither of these blades are good enough; you’d need to purchase a separate blade that is specifically designed for finishing jobs.

While the difference is not that extreme, there still is a difference that’s worth mentioning. The DWS780 weighs around 56 lbs while the DWS782 weighs about 65 lbs.

However, that 9 lbs difference can be significant if you’ll be using your saw for extended periods of time.

Now that you’re at the last words, you know the differences between the DWS780 and the DWS782. To wrap things up, here’s the full comparison briefly.

However, the saws differ in some points. When it comes to the blades, the DWS782 has a better blade that provides a smoother finish. Nonetheless, the DWS780 outshines the DWS782 when it comes to precision. With the XPS system that provides ultra-bright LEDs, you can tell where the blade is going to land from its shadow rather than from a laser that’s right next to it and, of course, more precise than what the DWS782 has to offer, which is nothing at all.

It’s also worth mentioning the DWS780’s dust control system is just not that good. It keeps getting clogged, and the dust goes everywhere. Lastly, the DWS780 is 9 lbs lighter than the DWS782.